When explaining FreakNight 2011 to others, you find yourself stumbling for the correct words to adequately sum up this night of perfection. Incredible, mind-blowing, everything you ever wanted and more…the list goes on and on.  With a sold out attendance of 15,000 people, Seattle‘s WaMu Theater found itself engulfed in a night of musical mayhem.  To all of you that missed October 28th’s madness: THIS IS FREAKNIGHT2011.

An interactive production put on by Seattle’s USC Events, FreakNight 2011 stunned the Northwest with a hefty lineup featuring artists such as Tiesto, Dada Life, Cosmic Gate Felix Cartal, Feed Me, Pendulum, The Japanese Popstars and more.  Unfortunately featured artist Doctor P dropped out at the last minute due to personal conflicts and a number of cancelled shows.  Despite that, the night still proved to be more than successful. 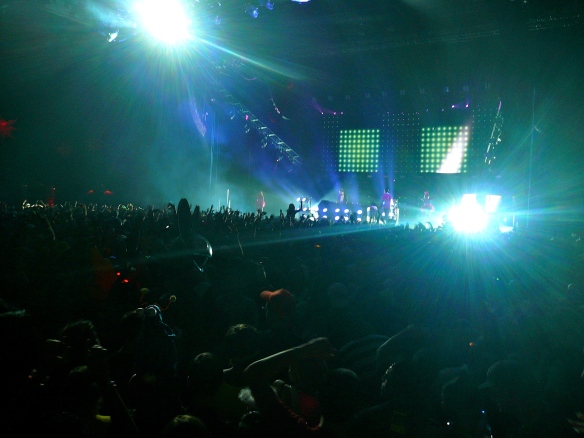 One of our favorite moments of this year’s FreakNight would have to be Dada Life‘s hilariously entertaining set.  The duo dressed themselves in fat chef costumes and bopped around the stage, inviting anyone in a banana costume to join in their fun.  Inflatable bananas and champagne bottles, along with an abundance of energy surged through the crowd.  From ‘Happy Violence’ to their interpretation of Benassi‘s classic ‘Satisfaction‘, the entire venue found themselves doing the Dada.

Tiesto certainly lived up to his name and dragged the crowd alongside him on a roller coaster ride of sound.  He threw tracks such as Delirium‘s ‘Silence’ and Sneaky Sound System‘s ‘I Will Be Here’ and even a remix of Oasis‘ ‘Wonderwall’ into the mix.  With almost 15,000 fans packed into the crowd, it surged from the stage, up the bleachers and to the ceiling with an ecstatic, continually dancing audience.  To sum it up, Tiesto was 100% captivating.

On one of the smaller stages, Felix Cartal had the area packed.  With dozens of confetti cannons, fans were caught dancing in a confetti storm of sound.  Felix bopped around blissfully in a Max suit from ‘Where the Wild Things Are’ and looked like he was having just as much fun as his wild audience.  With confetti constantly swirling around, everyone was happily lost in the moment.

To end the night, Cosmic Gate was the perfect pick.  Their beautiful light sound had the crowd still going into the early hours, with fog cannons blasting and lazer lights flying around.  We couldn’t help but just sit back, rest and let their sound cascade over us.  Perfect, perfect way to end the night. 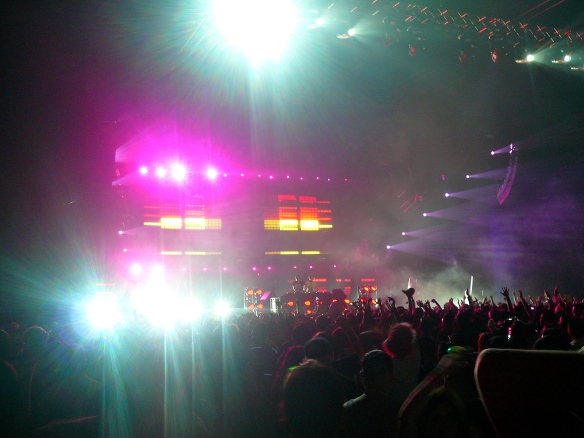 Be sure to check our more of the fun on USC Event‘s webpage where you will soon be able to find hundreds of photos and videos documenting this epic night!

All we have left to ask is: What did YOU think of FreakNight 2011.  All we can say now is that we are counting down the days to when we can get our tickets to FreakNight 2012.  Enjoy.

Error: Twitter did not respond. Please wait a few minutes and refresh this page.